Change documents help customers to learn about the changes that took place in the application.

A lot of areas in the NXT product are in the process of being redesigned and powered by Gainsight’s Horizon Experience. C/R360 is one of the most utilized areas within Gainsight and with this enhancement,  the end-user experience has been improved. Gainsight always gives highest priority to the customers and their requirements or feedback while enhancing any feature.

The areas of improvement are largely categorized into the following two sections as listed in the table below:

360 layout administration is now just one search away. With the new 360 in the application, a new navigation item 360 Layouts is added under Administration list in the left navigation pane.

Admins can now access C360 and R360 directly from the newly added navigation item 360 Layouts under the navigation pane. This simplifies the navigation process and saves time for admins. Gainsight has carefully designed the 360 Layouts and Configuration tabs to improve the overall experience of administrators.

The current listing screen has two sections: Global Sections and Company Layouts.  Both of these sections have a few columns that do not give sufficient information to the admins from this page, they need to manually open each layout/global-section manually to learn about them.

The layout management experience is completely reimagined. All the listing pages now have column headers available for the admins to easily identify the important information about each layout/section.

Admins can also decide the number of columns and which columns they want to see on all of the listing  page. Admins can simply click + to access the list of columns and select/deselect the checkboxes based on their requirements. 360 layout configuration experience is completely reimagined and is made intuitive by guiding the admins at each step on what exactly needs to be done next. This experience enables `users with minimal experience` to customize the 360 views. A better organized layout management page consists of

Admins must have adequate prior knowledge and experience about how layouts are configured. There are no specific sections which are contextual and help admins to perform the configuration task independently. This non-intuitive layout configuration experience is challenging especially for admins with minimal experience.

360 layout configuration experience is completely reimagined and made intuitive by guiding the admins at each step on what exactly needs to be done next. This experience enables `users with minimal experience` to configure and update the 360 views.

Note: Gainsight allows admins to save layouts in draft mode to save time during the layout creation process. For more information, refer to the Configure 360 Layouts (Horizon Experience) article.

The 360 layouts currently have some barriers/limitations around organizing customer information across 360. Many at times, this complicates the admins’ job, forcing them to rely on workarounds which lead to too many 360 sections.

These barriers are now removed to enable admins to create more meaningful layouts and workflows. Some examples are -

Standard widgets are the Out-Of-Box widgets that can be included in the Summary section. The range of Standard Widgets is now broadened. These standard widgets are designed to highlight key CS metrics and require minimal to no configuration. This reduces the admin burden significantly by making it simple to derive insights from standard data. Following are a few newly introduced widgets:

In addition to the above mentioned new widgets, the user experience of the existing widgets like Open CTAs, Open Success Plans, NPS and Text is improved. For more information on the complete list of widgets and fields, refer to the Widgets Types in Summary Section in the Configure Summary Section article.

Customizing the ‘List View’ and ‘Relationship Card View’ on the Relationship section of C360 is not very straightforward. And, it is currently not possible to use the same configuration across Relationship types. The 360 layout creation process can be time consuming, it can sometimes take multiple working days for an admin to achieve the perfect 360 experience. Admins can now save their work as a draft and pick it up later exactly from where they left it.

Identifying the 360 layout used when a specific user accesses the 360 can become very tricky in the current experience, especially when the user has multiple 360 layouts. Currently there is no simple easy way to find this out. With the new experience, admins can now quickly find out which layout is used for a given User and Company combination. Click Manage Assignments > Find Layouts to search with the name of a user or company and identify which layout is assigned to that user or company. Once you click on the assigned layout, it navigates you to the specific layout’s Configuration Sections page. You can check out the following video to learn more about the new 360 experience for the end users. You can also go through the content covered in the following sub-sections.

Navigation is not user friendly. There can be 20-30 sections available at times in 360 for one customer, but the end user might not use all of them on a daily basis. It becomes very time-consuming every time to search for the sections that the end user needs the most. There is no way that you can personalize the available sections.

Users can now decide which are the important sections they want to see on the page for a specific customer instead of all the sections. The newly introduced option called Personalize Sections enables the end users to reorder the available sections according to their preferences. End users can even decide to pin the most frequently used sections on the page and rest can be hidden in the dropdown. This saves a lot of time and makes the users more efficient in accessing and handling their customers’ data.

The layout of the Summary section is rigid and the number of widgets it can accomodate is very less. This in-turn limits the amount of customer information that Summary section can hold.

And it is currently not possible to edit the customer information from the Summary section, users need to navigate to Attributes section to do this.

Widgets are not interactive.

The Summary section is completely redesigned and is no more rigid. Some of the key changes are as following

You can only add specific types of widgets (KPI) to the Summary section, and these widgets are limited and less interactive.

Gainsight has added new widgets in the Summary section with better visualization and capabilities. All the out-of-box widgets will be available for all the new customers and for the existing customers, they need to be manually added by the admins.The following are the new widgets:. 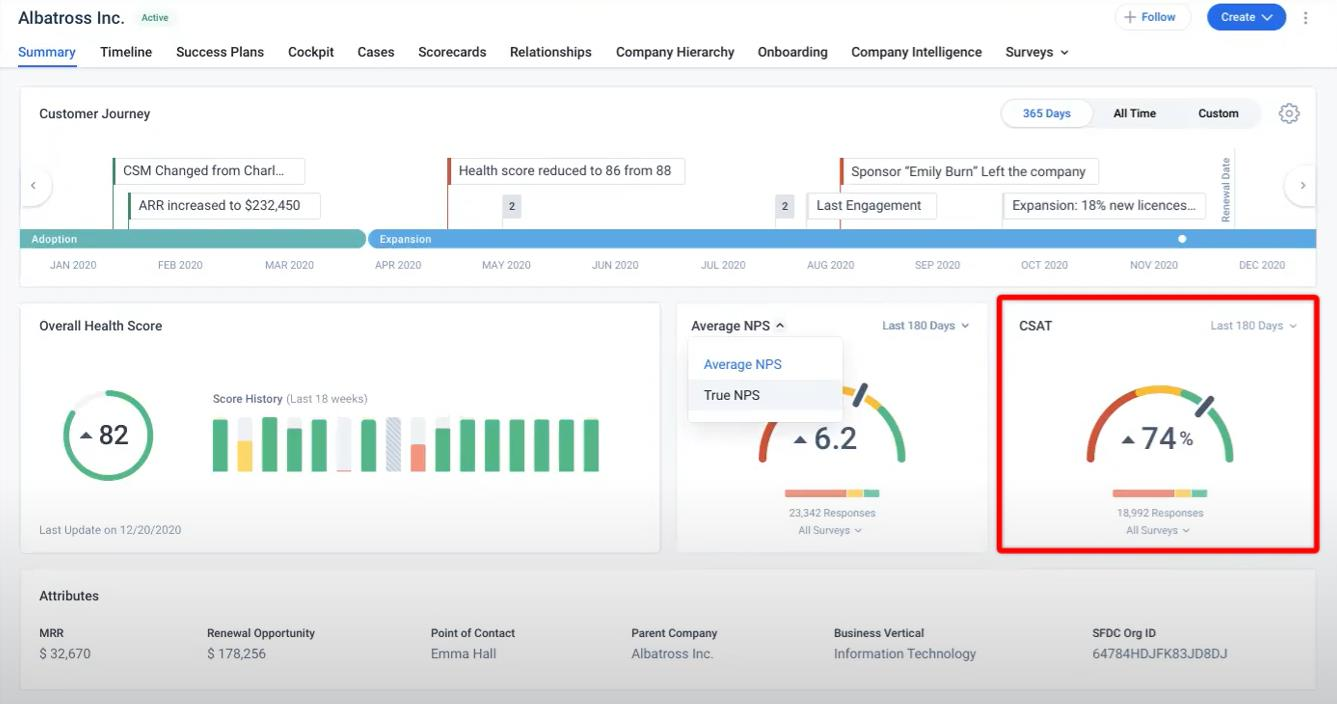 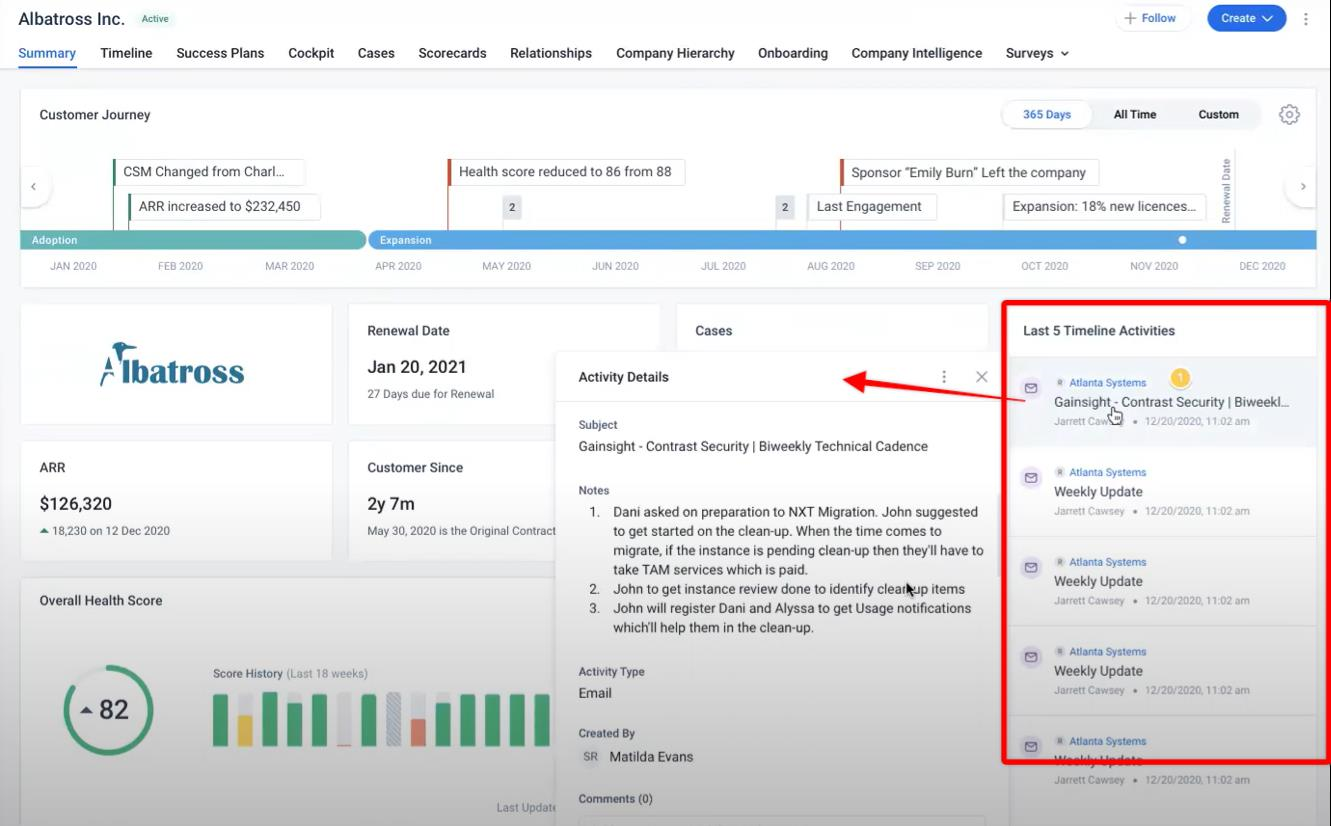 The amount of information end users can include in the Summary section is very limited. End users cannot customize the Summary section. There is a lot of empty space towards the end of the section and that space cannot be used. Arranging information is quite challenging in the current 360 environment in every section. For example, the Attributes cannot be grouped, or reports with different objects cannot be added etc.

The design and placement of the widgets are taken care of and structured effectively in the Summary section of this improved edition of 360.The design is now considerably more flexible and contains more information. 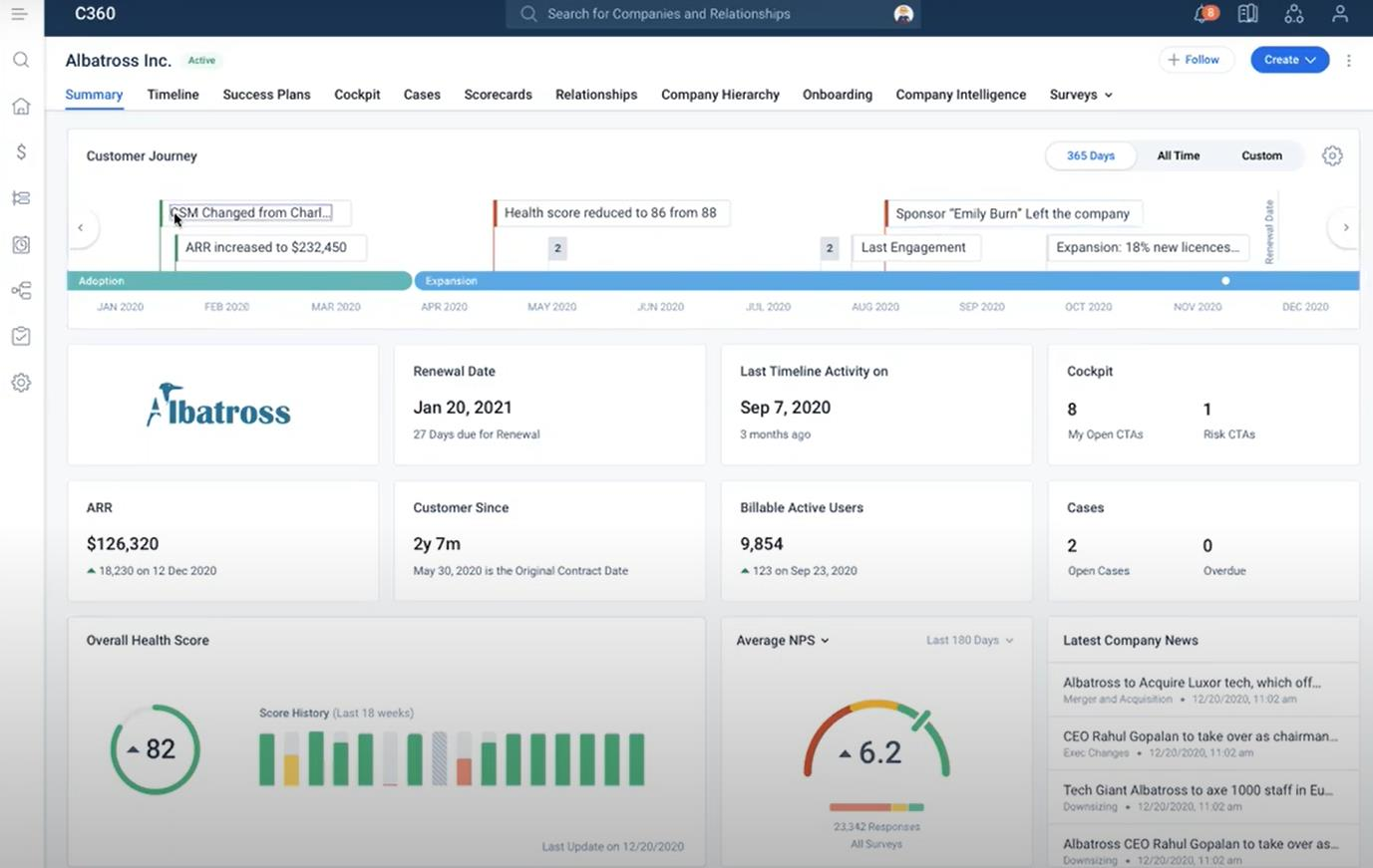 Note: A few out-of-box widgets are included in the Summary section but the number of widgets are limited to 10-12.

Customer journey is one of the new widgets that are included in the Summary section. This widget contains the information about the customer’s journey in a timely manner. The purpose of this widget is to give a quick overview about key events or milestones that customers have achieved. For more information, refer to the New Out-Of-Box Widgets section.

The horizonized 360 enables end users to add a logo which was not there previously.

Apart from Timeline, end users can now add notes in the Rich Editable Text Editor widget that allows the end users to quickly capture any notes on the Summary section. This widget has the inline editing or formatting capability. 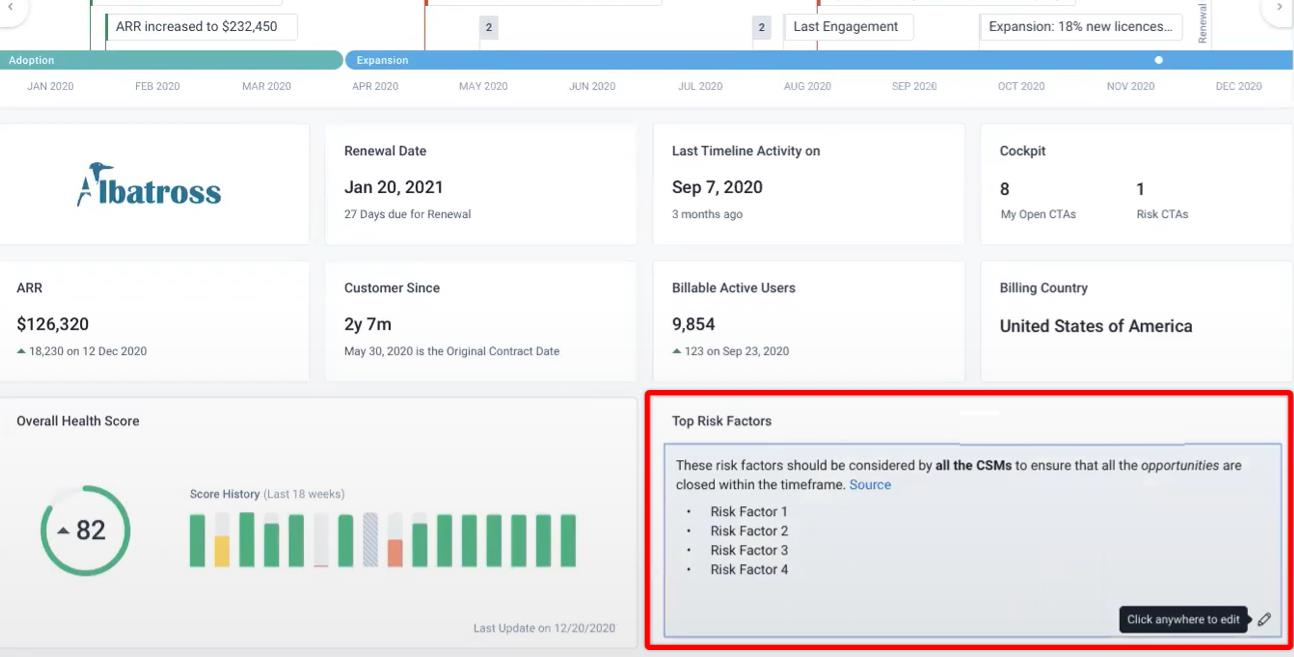 For more information on the complete list of Filed Widgets which are editable and non-editable, refer to the Configure 360 Layouts (Horizon Experience) article.

Performing several actions such as creating a CTA or logging an Activity are complex. To add an Activity or make a CTA, end users used to go to the Timeline tab or the Cockpit tab, which required them to work in multiple tabs.

Attributes can now be organized into logical groups. This helps admins make the attributes more consumable for end users.

End users can now decide which are the important sections they want to see on the page for a specific customer instead of all the sections. The newly introduced option called Personalize Sections enables the end users to reorder the available sections according to their preferences. End users can even decide to pin the most frequently used sections on the page and rest can be hidden in the dropdown. This saves a lot of time and makes the end users more efficient in handling their customers’ data.

In the new C360, end users can now filter data according to their requirements. The new C360 has been redesigned to enhance its capabilities and make end users more productive.

The Company Hierarchy section contains information on the parent and child companies in the hierarchy. This is an existing section, but it’s been horizonized in the new version of 360. End users can now increase/reduce the column width based on their preference. This gives the end users the capability to read any content that holds more space and does not appear on the Company Hierarchy > List view page.

The column width can be controlled in the Relationship section also.

Along with this, Gainsight introduces a new view called Chart view. It provides a great visualization of the company’s place in the hierarchy.

Sharing 360 layouts with customers was not intuitive. The Scrolling option was placed randomly. For more information, refer to the People Section in New 360 article.

Activating the new 360 in the customer instance is completely admin-supervised. Admins have the flexibility to plan the rollout for their instance. Admins can preview and optimize the layouts before activating the new experience for end-users.

For more information on C360/R360, refer to the following articles: