This article explains how multiple currencies are supported in Gainsight. Gainsight allows Admins to load currencies into the application with original currency codes such as USD, EUR, GBP, etc. without having to manually convert them into a specific currency code set in Gainsight.

Gainsight recommends you to refer to this short video (4 mins) for a quick overview of multi-currency impacts in Gainsight.

It takes a maximum of 24 hours to complete enabling Multi-Currency. You will be able to use the mentioned features again, once Multi-Currency is enabled.

Following are the major capabilities offered by Multi-Currency Support:

Admins should configure Corporate Currency for the following capabilities:

The following options are available to edit the supported currencies:

End users can set their preferred currency code at the My Profile > Default Currency settings as shown below: 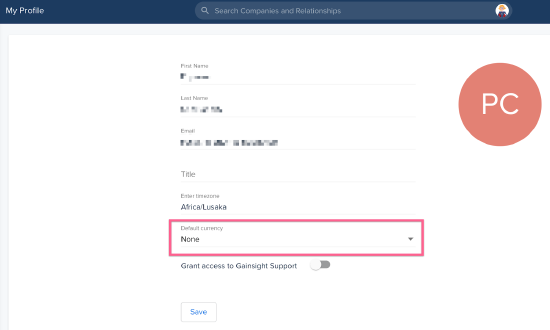 IMPORTANT: Once a user changes Default currency, the user should log out of the org and log in again for the changes to be applied across Gainsight.

User’s preferred currency code is synced from Salesforce and honored across Gainsight. For more information on the user currency setting in Salesforce, refer to the Set Your Personal Currency  Salesforce article.

To enable and configure Corporate Currency: The following image contains the Analysis Report with Display and Field names, that need editing for enabling Multi-Currency. Following image shows the list of S3 Rules in the Analysis report. You can click any rule name to navigate to the specific rule configuration page.

Following image shows the list of S3 Jobs in the Analysis report. Before enabling Multi-Currency, you must review the Multi-Currency analysis report and make required changes to the Gainsight configurations such as S3 rules, S3 jobs, and field names, so on.

Note: Before enabling Multi-Currency, you can request the Analysis Report again by selecting Review Multi-Currency Report from the dropdown.

Once you enable Multi-Currency, you can add supporting currencies by one of the following methods:

Once Multi-Currency is enabled, all of the global currencies are loaded to Gainsight. You can add one supported currency at a time through this method.

To add a supported currency manually: Note: Once you add a new Currency, deleting this is not allowed from the Currency Management page. However, you can deactivate the Currency.

Once Multi-Currency is enabled, you can add multiple supported currencies from a CSV file that you have created or downloaded from an external system. Your CSV file which is used to upload multiple currencies, should have the following configurations:

To perform the bulk upload:

Note: If Corporate Currency in Gainsight does not match with Salesforce, execution of the Currency Sync job fails.

You should schedule this job to set the frequency of updating this currency information in Gainsight. For more information, refer to the Salesforce Connector > Configure Out of the Box Jobs article in the Additional Resources section.

Following options are available from the menu of any supported currency:

To update the conversion rate of a supported currency: Admins can ingest currency data into the Gainsight system through the following data ingestion channels:

While configuring any data job or rule in the above ingestion channels, you can select either the source or target preferred currency code to upsert currency data and their respective ISO codes. The toggle button is set to honor Target Currency by default and it can be switched ON to honor Source Currency. A similar toggle button is available in the field mapping section of the job configurations in the data ingestion channels listed above.

If you select to honor source currency, system honors the following behavior while upserting currency values and the currency ISO codes:

Output record in the Gainsight object:

In the previous example, it is considered that:

Behavior in other scenarios:

Output record in the Gainsight object:

In the above example, it is considered that:

The system behaves in other scenarios similar to how it is explained in the source preferred currency.

The following table lists all the modules which are impacted due to Multi-Currency enablement.